With his tree-like frame and strangely ethereal eyes floating atop the angles of his face, there is no mistaking the icon that is Jeff Mills. His name alone is synonymous with cultural significance, artistic and technical mastery and Black excellence. Over the course of his epic, near four decade long career, “The Wizard” has constantly displayed a level of preternatural technical prowess and an ear that has come to define him as one of the foremost tastemakers in electronic music. With his roots in Detroit, Mills is one of the pioneers of the Detroit techno form. His work with the Underground Resistance would lay the blueprint for the future of the sound, both in the Motor City and across the pond in a place called Berlin. Eventually leaving the UR to establish his own label Axis Records in 1992, Mills made for himself a playground of sorts; a space for the exploration of his craft and the development of tomorrow’s talent. Because at the core of Jeff Mills is a love for music itself, transcending genre or definition. It’s a love that has led Mills to increasingly new musical territories, expanding his reach beyond techno and electronic music and into the world of jazz. It’s not entirely surprising; after all, both forms come from a history of Black identity and expression, and both share a sort of improvisational DNA in how they are played. It’s these qualities that perhaps led Mills, the cultural curator of note, to collide with fellow Detroit native Rafael Leafar, a multi-instrumentalist whose roots lay planted in jazz. The meeting of these two titans of the Motor City music world would result in The Override Switch, a collaborative album that explores the agency of the musical by eschewing genre conventions and restraints. The result, a melding of two of Detroit’s not-so-distant musical histories, weaves Mills’s electronic genius with the soul of Leafar’s organic instrumentation. We were honoured to speak to Mills on the cusp of the album’s release, curious to find out more about how this collaboration came about and how the sound of the music evolved.

Jeff, thank you so much for taking a moment to chat with us. It’s a real honour to speak with a legend. Your album The Override Switch with Rafael Leafar is out on October 15th. How did this collaboration come about?

From a mutual friend, I was given Rafael’s contact in hopes that he might be interested in recording some horn parts on some tracks that I had made for a previous project called “Think Again” (Millsart). He did and the result was fantastic, so I brought the idea to him that I could create more tracks for his consideration. We’ve had a few discussions over the phone and Skype/Zoom, but we still have not physically met. I would send him the foundation for a track, he would record the horn parts. Then I would mix the track to a stereo master. The album took about 3 weeks to complete.

There are a number of similarities between jazz music and electronic music, specifically with regards to the improvisational nature of how both forms are played. Would you agree?

Today, most producers in Electronic Music do not improvise. In fact, most no longer use the keyboard and keys at all to produce so, finding the similarities between these two genres might be hard, but I’m convinced that Techno can learn a lot from mixing and engaging with Jazz. Perhaps Electronic Music producers might find ways to physically interact with their instruments once again.  Jazz is about being free to express whenever, however. In Electronic Music, it seems we’ve sacrificed that freedom for a sense of perfection. 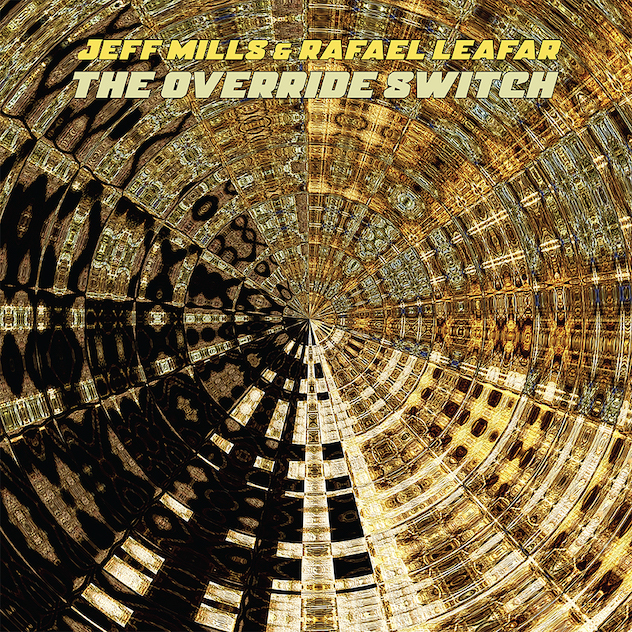 What connections does The Override Switch find between jazz and electronic music?

With this album, most of the Electronic parts were played by hand so that it would have the same feel as how Rafael would play. Then, acoustic percussion was added to reinforce the stiffness of the drum machine – to give it a more organic feel.

You’ve experimented with jazz before. What makes this collaboration and process different?

In most other cases, there had been some discussion as to which direction the music would travel. But, with The Override Switch, it was mostly off of true intuition. I would listen to his horn parts and sense where he was attempting to go – and vice versa. Our conversations were short and most of it was just talking about the similarities we have since we are both from the same city, Detroit.

Both you and Rafael hail from Detroit. How has this shared heritage shaped the language of the music you’ve made together?

Shared mentality and probably a similar view about Music and the ways it can be even more effective. People in Detroit tend to consider Music more seriously than what I see in other parts of the World. Yes, it’s for entertainment and relaxation, but it can also be for healing, confessing, enlightening, escaping and finding oneself. So, a pop cultured idea that music should always be confronting, extreme, climatic in order to be considered “good” or “effective” is far away from the truth. We’ve learned this at an early age. In truth and because of its suggestiveness, Music is nothing more than a reflection of who you are, not the artist that makes it.

With The Override Switch, it feels like there is an essential element of futurism. Why do you think the ideation of utopias is so important in our present moment?

I think that every one of us has a section in our minds that is designated for Utopia. Some have larger sections than others, but it’s there. If looking forward without fear is considered as futurist, then alright.

What can we expect from you and Rafael after the release? Any plans to perform the music live?

We’ve briefly discussed it and know that there could be opportunities to play this album live but, I think it could be important to use this “idle” time, when people might be listening to music slightly closer than before the pandemic to say things with music that would have been drowned out by dancing, pushed aside by populism and ignored by skepticism. So, we both agree that if and when possible, we’ll tour this project.

Thank you so much for your time, and congratulations! We cannot wait to experience what you have created.

The Override Switch is available now via Axis Records. Download it here, and listen to Infinite Voyage below.