Album of the WeekAlbumsMagazineReviews
·3 min read

Mapping the rise and subsequent evolution of London DJ and producer AYA is to map the journey of an artist blossoming into their identity. What began as the subversive and  performative DJ act LOFT on the UK’s queer underground has shapeshifted into this harbinger of the future; an entity warping the expectations of club music with her impossibly detailed yet amorphous sound designs and remarkable technical prowess. Add to this a pointed self-awareness and sense of humour that tiptoes between ironic self-parody and nihilism and you arrive at AYA as she is now. Dazed just called her music a resistance of “mass market queerness.” Pulling together the threads of her work as LOFT (chameleonic, mind-bending arrangements of club sounds) and her lived experience as Aya Sinclair (somewhat anxious, a little curious and queer AF), the artist’s debut album on Hyperdub im hole is an arresting self-portrait synthesised from mutant, abstract electronica and the seeringly honest ‘Dear Diary’ sensibilities of Taylor Swift.

Much of im hole appears autobiographical, with AYA’s writing delving into deeply personal territory. The trans lived experience is a major theme, as is the process of self-actualisation and loss. But while these themes burst open the shutters into her life, they’re handled with a degree of irony that challenges the inherent solipsism at the centre of self-portraiture. It’s the sort of humour that titles a track made up of incoherent dabs of electric buzzes and crashes If [redacted] Thinks He’s Having This As A Remix He Can Frankly Do One and which governs the stream-of-conscious style of AYA’s lyrics. The album’s title hints towards this itself, a simultaneous commentary on new age self-love and the sort of deprecating sexual truisms enforced on queer bodies. ‘im hole’ says a lot in saying very little, the ‘hole’ in question becoming the sort of liminal space AYA creates within which exists the potential for anything to happen. The songs here mostly take the shape of monologued beat poems, uttered in a transhuman machine timbre as AYA freely manipulates the sound of her voice towards increasing levels of cyborgism. Against this, disparate synths and pads trickle and crackle like streams of synthetic hydraulic fluid being sucked into the vacuum of deep space, arriving as twisted, futuristic grime. 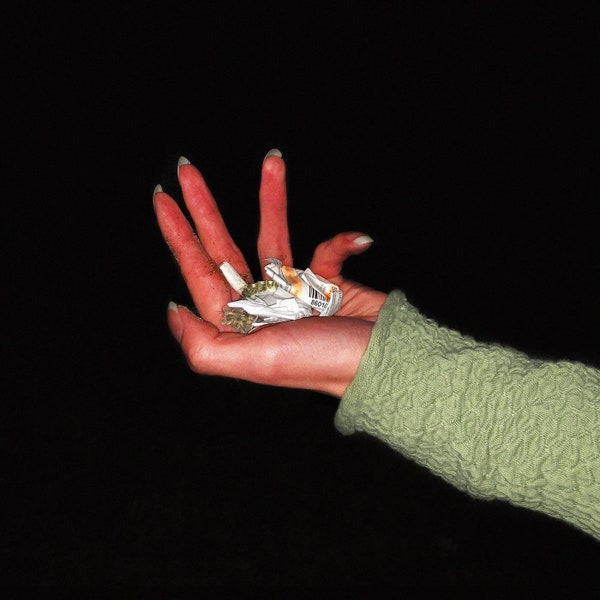 somewhere between the 8th and 9th floor is an extended overture of sorts that opens im hole with a grating, elliptical industrial drone. As if witnessing a scene in an elevator play out from within the machine itself, a cybertronic AYA begins a diatribe on choosing red or blue and not forgetting to breathe. There’s theatre in the way AYA uses the voice on im hole; she plays with the shape of dialogue itself, be it through playing with her articulation of words or the electronic manipulation of her voice. From a delicate whisper to a genderless flow on what if i should fall asleep and slipp under, to a nasal rasp on still I taste the air and Emley lights us moor (feat Iceboy Violet). This makes for a remarkably dextrous experience, one that literally swallows you whole as you journey further into AYA’s hole. The spoken word entries are surrounded by pieces of instrumental madness. The buoyant arpeggios and off-time slur of the only solution i have found is to simply jump higher is notable, as is the ketamine wormhole of tailwind and the incoherent jungle of dis yacky.

Relegating im hole to a singular classification is difficult. Post-club comes to mind, but that feels like a disservice to the nuanced references of AYA’s work. There’s as many echoes of Yoko Ono’s wild performativity and Kate Bush’s playful theatricality as there are pinpricks of Aphex Twin and Skepta. Yet as liminal and non-specific as it is, the thing about im hole is that everything sounds incredibly considered. Even at its most random or minimal, there is so much detail in its design and precision in the execution thereof. This works in favour of AYA’s slam poetry approach, resulting in music that communicates as much through its aesthetic as it does its language. It’s SOPHIE if her only point of reference were Nirvana, cyborg grunge that ruminates on the frustration of young adult existentialism while vehemently surging forward into the era of the metaverse. This constant state of flux that defines AYA means that although im hole is technically her debut album, it’s really more a current location of an artist who has had multiple debuts, and will undoubtedly have endless more to come.

See the music video for Emley lights us moor (feat Iceboy Violet) below.